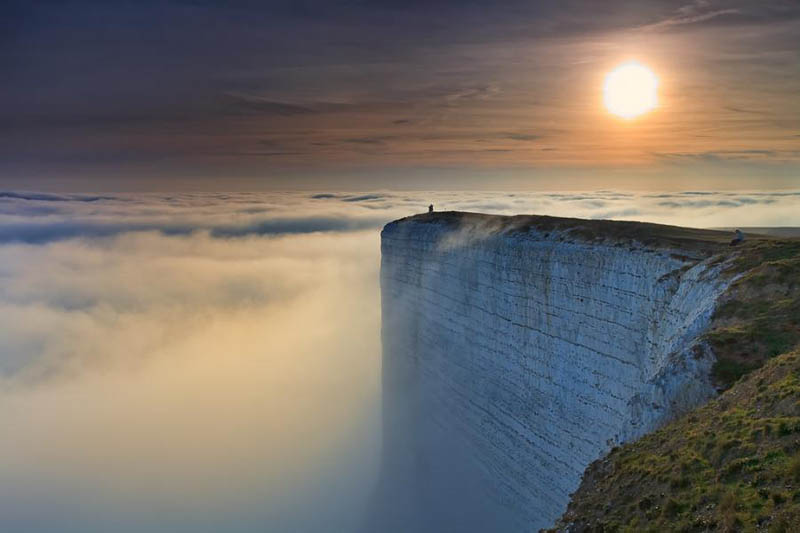 Beachy Head is a chalk headland on the south coast of England, close to the town of Eastbourne in the county of East Sussex, immediately east of the Seven Sisters. The cliff there is the highest chalk sea cliff in Britain, rising to 162 m (530 ft) above sea level. The peak allows views of the south east coast from Dungeness to the east, to Selsey Bill in the west. Its height has also made it one of the most notorious suicide spots in the world.

The chalk was formed in the Late Cretaceous period, between 65 and 100 million years ago, when the area was under the sea. During the Cenozoic Era the chalk was uplifted (see Cenozoic Era). When the last Ice Age ended, sea levels rose and the English Channel formed, cutting into the chalk to form the dramatic cliffs along the Sussex coast.

There are an estimated 20 deaths a year at Beachy Head. The Beachy Head Chaplaincy Team conducts regular day and evening patrols of the area in attempts to locate and stop potential jumpers. Workers at the pub and taxi drivers are also on the look-out for potential victims, and there are posted signs with the telephone number of Samaritans urging potential jumpers to call them. Deaths at the site are well-covered by the media; Ross Hardy, the founder of the chaplaincy team, said this encouraged people to come and jump off. Worldwide, the landmark’s suicide rate is surpassed only by the Golden Gate Bridge in San Francisco and the Aokigahara Woods in Japan, according to Thomas Meaney of The Wall Street Journal. [Source]