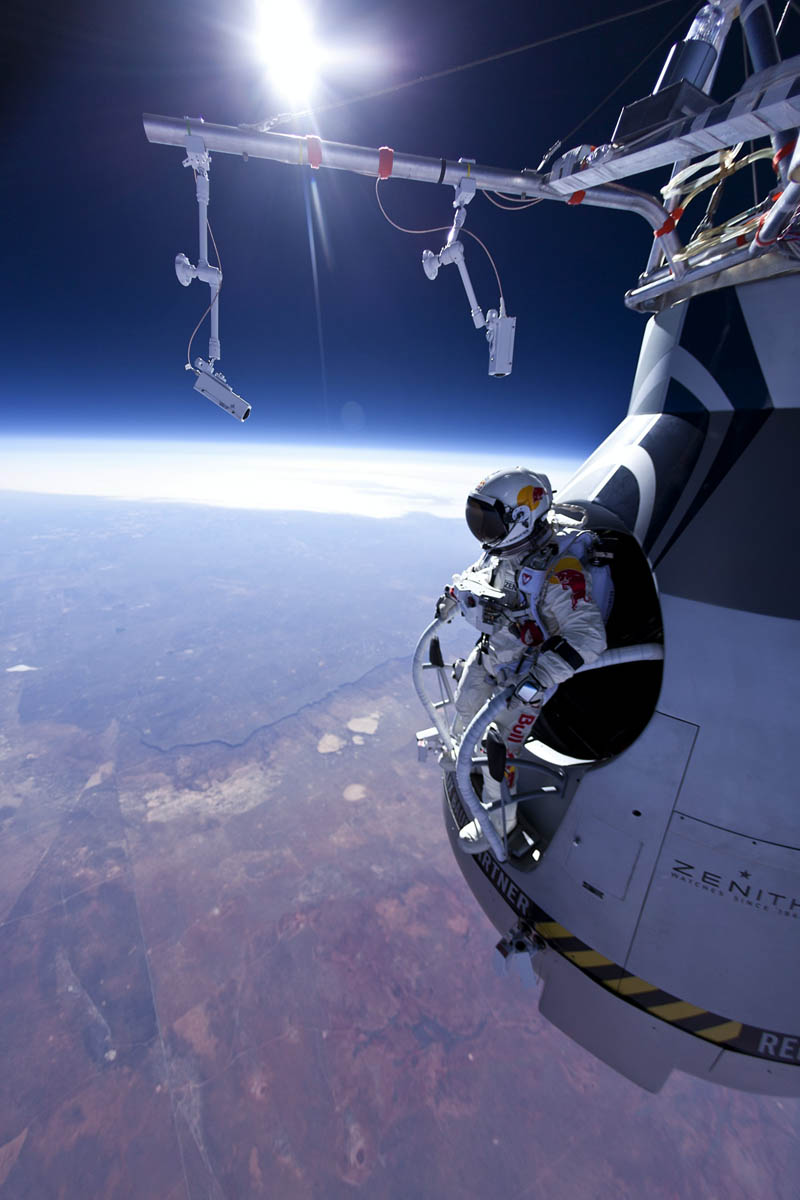 On March 15th, 2012, Austria’s Felix Baumgartner jumped out of a space capsule from an altitude of approximately 71,580 feet (21,818 meters) as the Red Bull Stratos project moved forward into the manned flight stage in New Mexico. The 42-year-old rode the space capsule attached to a giant helium balloon above the so-called “Armstrong Line.”

At precisely 9:50 a.m., Felix Baumgartner landed with his parachute in the New Mexico desert nearly 30 miles away from Roswell, wearing a spacesuit as he safely completed a journey towards the edge of space. Just 1 hour and 40 minutes earlier the extreme athlete from Austria had lifted off from Roswell on board a space capsule attached to a 165-foot-high helium balloon that brought him to an altitude of nearly 71,580 feet.

The goal of this expedition towards the edge of space was to fly over the so-called “Armstrong Line” and to do tests under real conditions for the first time. That is the area in aerospace where earthly boundaries and laws disappear. It is an inhospitable region for humans where liquids begin to vaporize and temperatures plunge to minus 75 degrees Fahrenheit. Humans could not survive in this zone without a spacesuit to protect them from the forces of depressurization and lack of oxygen. To get there, Baumgartner first had to make it through another “death zone” closer to earth. During the first 1,000 feet of his ascent there would be no chance of escape in the event of a crash because there would be no time to get out of the capsule or open the parachute.

The ascent and his exit from the capsule went exactly as planned. Baumgartner plunged back towards earth at a speed of nearly 365 miles per hour (587 km/h). He said later the most difficult part was the extreme cold he encountered. “I could hardly move my hands. We’re going to have to do some work on that aspect,” he said. The Austrian added that he also needs to work on getting accustomed to the extraordinary dimensions of space. “I wanted to open the parachute after descending for a while, but I noticed that I was still at an altitude of 50,000 feet,” he said.

Even though it was only a test jump for his forthcoming leap from an altitude of nearly 23 miles, Baumgartner still managed to make it into the record books. He became only the third person to leap from that altitude and survive. The only people to successfully jump from greater heights were Russia’s Eugene Andreev and American Joseph Kittinger, both of whom accomplished their feats in the 1960s. Kittinger, a living legend now 83 years old, is serving as a mentor for the Red Bull Stratos project and was heading Baumgartner’s test flight from Mission Control in Roswell. Kittinger is on the team of nearly 100 top experts recruited from the fields of science, medicine and aerospace for the mission. Technical director Art Thompson was involved with the construction of the Stealth Bomber, and medical director Dr. Jon Clark served as the crew surgeon for six Space Shuttle flights.

After the seasonally windy conditions pass, there will be another test from the altitude of 90,000 feet before Baumgartner and the team will attempt to break the record later this year.