People get tattooed for various reasons. Many get them because they’re fashionable. Others get them as a reminder or something or somebody special. But some get them for the opposite reason, to cover up something they’d rather forget.

Some had surgery scars and dog bites they wanted to hide, while others decided to get tattoos to cover injuries inflicted by abusive partners or the painful results of bets gone wrong. They’ll make you think twice the next time you see somebody with a tattoo. 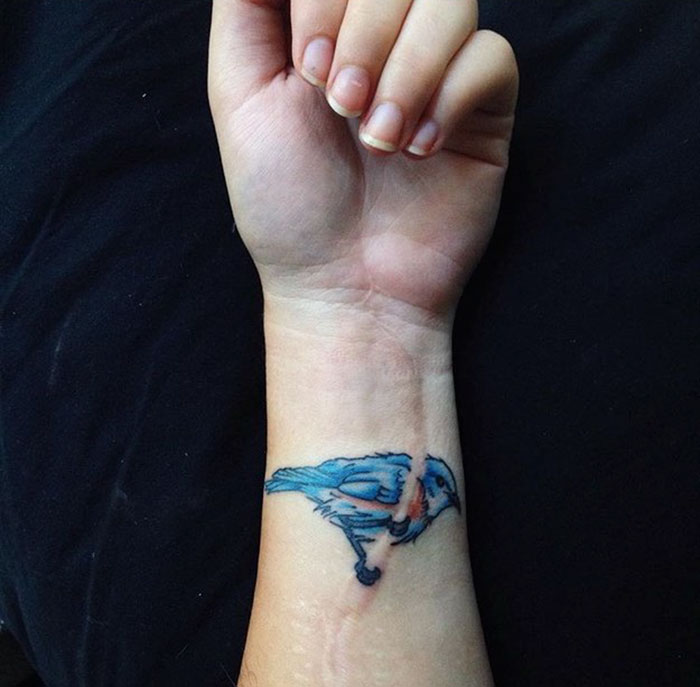 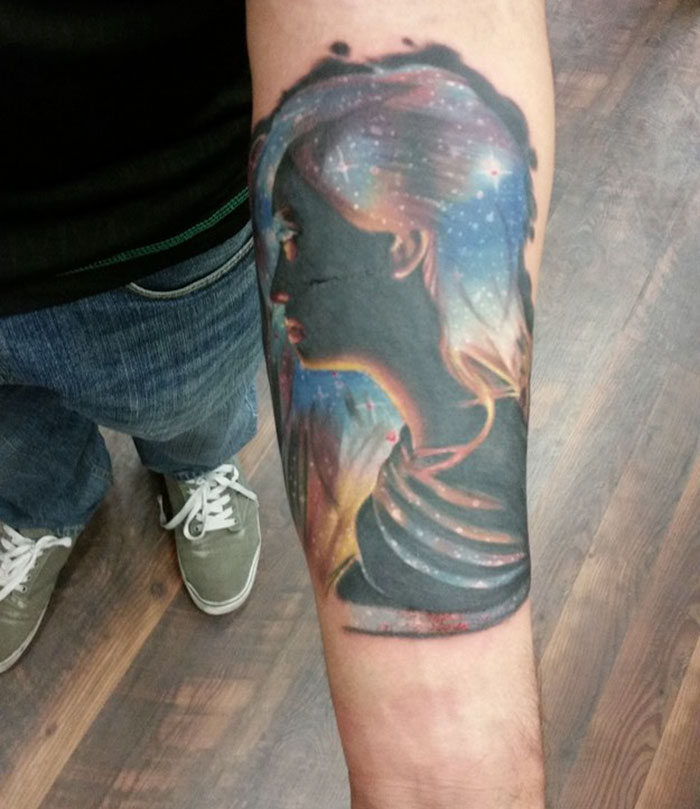 It’s covering a scar from a childhood dog bite. 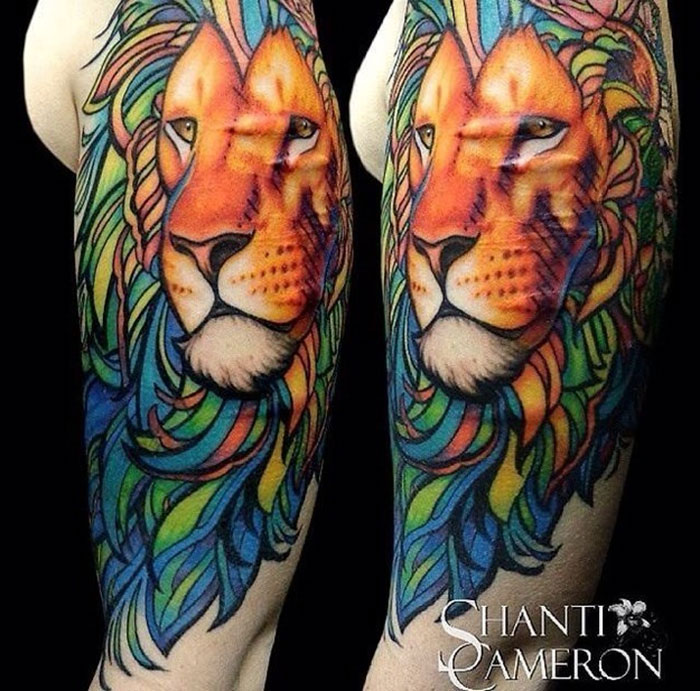 When I was a kid, I was picked on multiple reasons; to me the worst of which was for simply being the big girl. I was 2 feet taller than everyone in my class and easily outweighed most kids my age. By the time I was a teenager I was neck deep in depression and taking it out on myself seemed like the only relief. Now that I’m older and much better equipped to deal with my mental health, I decided to cover up my years of self-harm scars. A lion was the first thing I thought of when I wanted something representing strength, plus we put in lotus and azalea blossoms in the mane for their symbolism of overcoming struggle. Instead of seeing a painful reminder of where I was, I get to look at this badass symbol of where I am 🙂 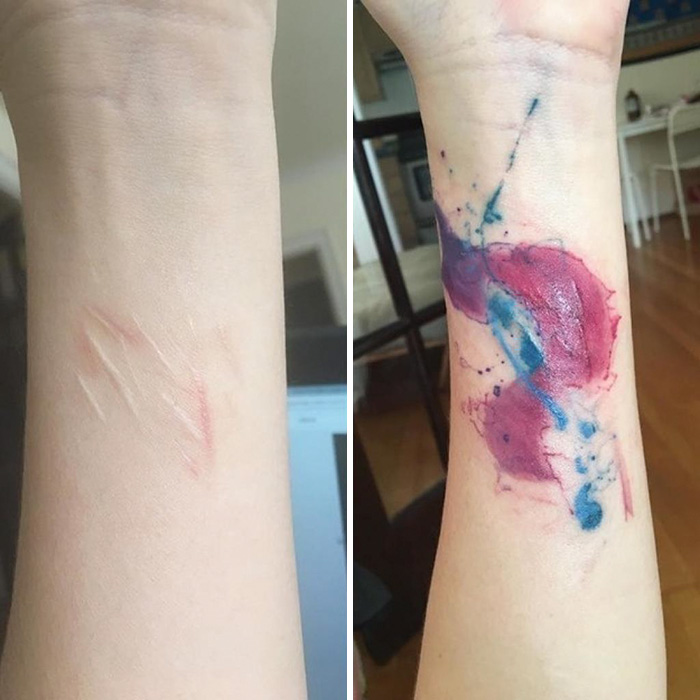 Nobody has ever brought up my scars for the years I’ve been doing it. My little brother is 8 and everyone knows I am his biggest role model. One day he asked me, “What happened?” and pointed to my wrist. I made up a story, but I didn’t want him finding out what it really was and thinking it was an okay thing to do because I’ve done it. I instantly made an appointment to get them covered up. I feel so much more proud of myself now than I ever have. 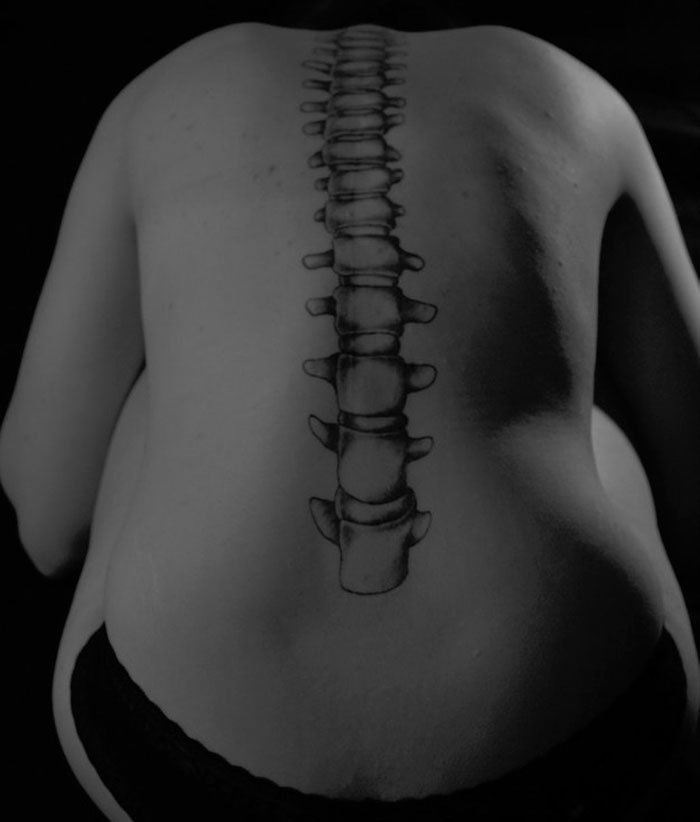 So let me start by saying my real spine has never looked and will never look like this. When I was 15 years old I was diagnosed with severe scoliosis — a 65-degree curve in my spine in the shape of an S. It was beyond correction with a brace and I was told that I would need surgery in order to live into adulthood. The surgery was incredibly invasive and involved straightening my spine and surgically planting two titanium rods on either side of my spine attached by 15 screws which were screwed directly into my vertebrae. The tattoo is from a medical textbook and spans 17” up my back, over my scar, which you can barely see. It is a symbol of my recovery and strength. My spine has never looked like that, nor will it ever look like that, it is simply the spine that I should’ve had. 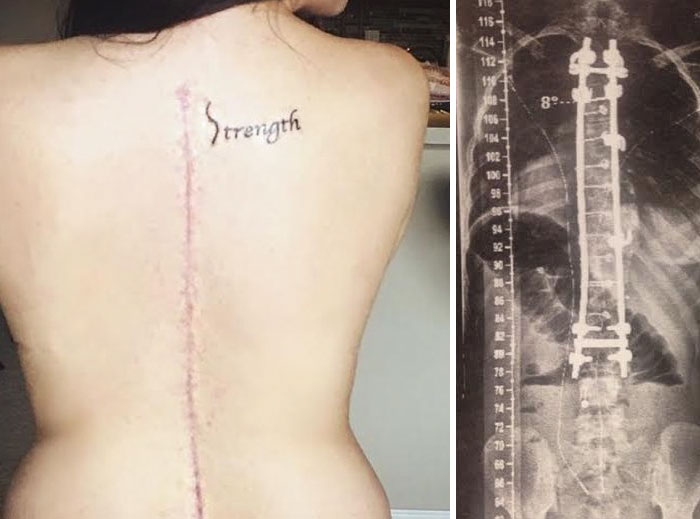 Instead of hiding my scar, I decided to show it off. Last July I had scoliosis spinal reconstruction surgery, placing two titanium rods on either sides of my spine and fusing two-thirds of my spinal vertebrae into one large bone. This left me with a noticeable two-and-a-half-foot scar down the center of my back. I got the word ‘strength’ tattooed next to my scar. The ‘S’ is a tracing of my actual spine from an X-ray before my surgery. It took a lot of strength to recover from such a hard surgery and I want a constant reminder of that. 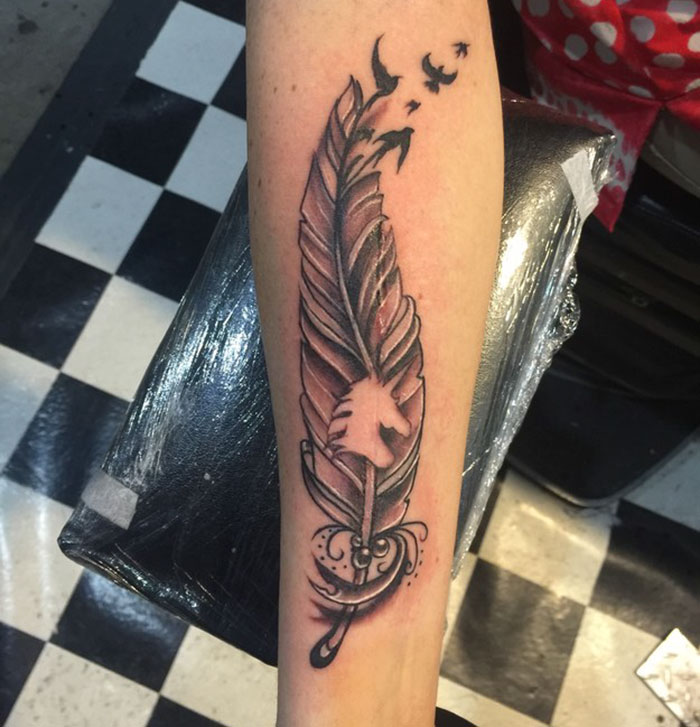 I got this tattoo to cover a scar from an abusive boyfriend. He broke my arm and I had a metal plate put in it. I still went back to him many times. That scar reminded me of how weak I was and I wanted something beautiful instead. My cousin whom I was really close to committed suicide a couple months ago and I wanted to honor him. He called me unicorn. 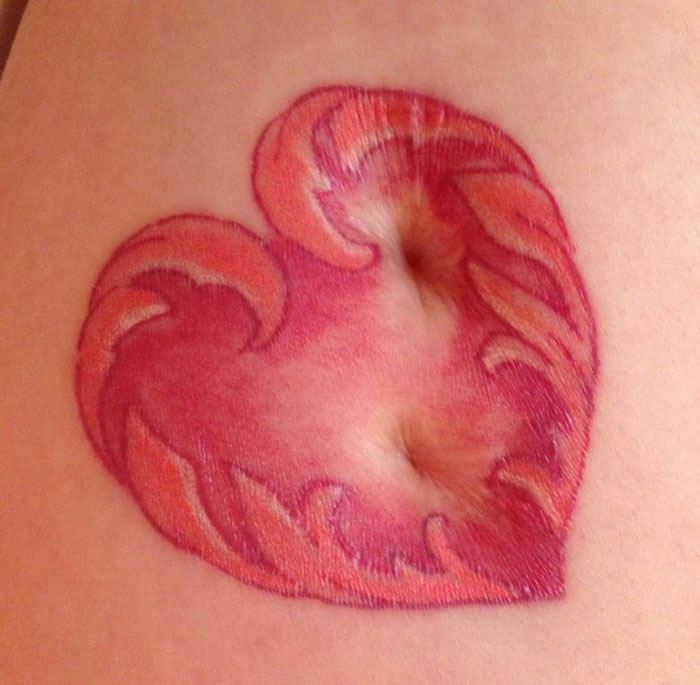 When I was 10 I fell off a motorcycle and shattered my femur. They put in an external fixator to hold everything together while it healed. It left four scars on my leg. On most people they fade, but I scar badly and they still look fresh so I made them pretty. The scars themselves didn’t hold the color but I’m happy with how they came out.This picture shows the scars toward the top of my leg near my hip. The scars near my knee are more spread out and each have their own matching heart. 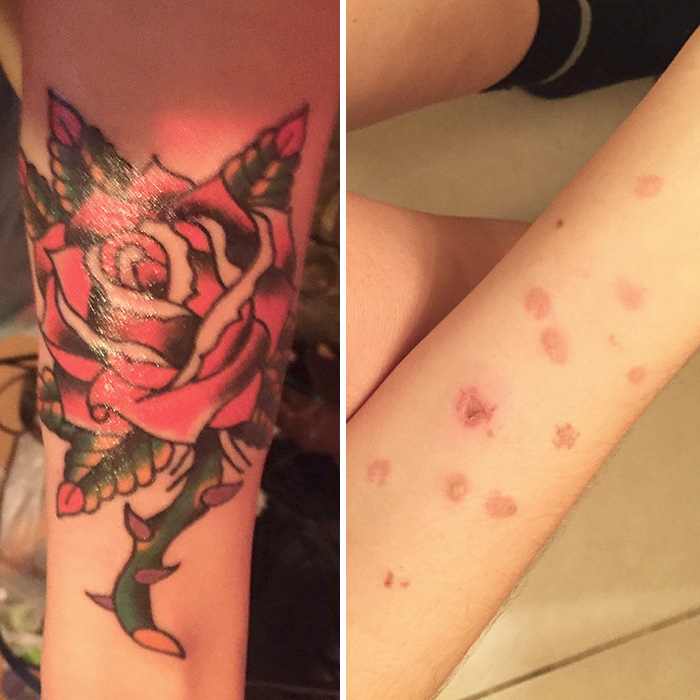 At a point in my life (September 2015) I was suicidal, and I was sitting on my front porch just burning myself with a cigarette over and over. My mom sent me to a mental hospital which honestly didn’t help me. What helped me was coming back home. Once the scars healed, and I was okay, I decided to get a traditional rose to cover up my burns. I have to still go back and get a touch up on some parts where the scars are still slightly visible. It may not be the most beautiful tattoo, but it represents growth. I love my tattoo. It’s beautiful to me, and it’s the only tattoo my mother approves of because of its meaning. 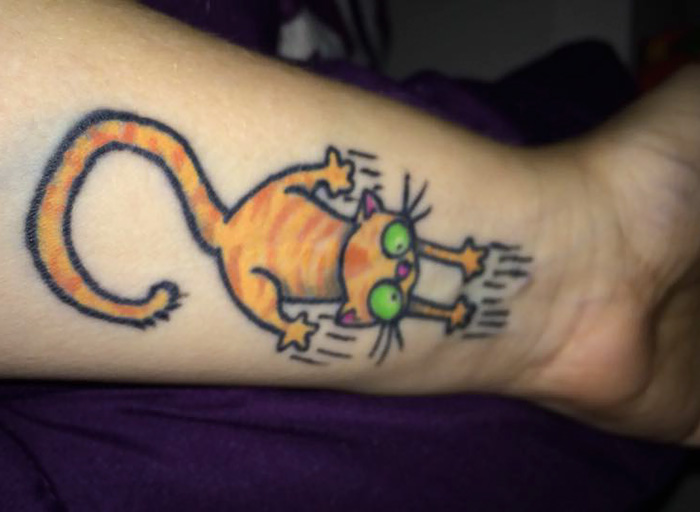 I got cat scratch disease from a cat scratch and had to have the wound removed. Covered the scar with this. 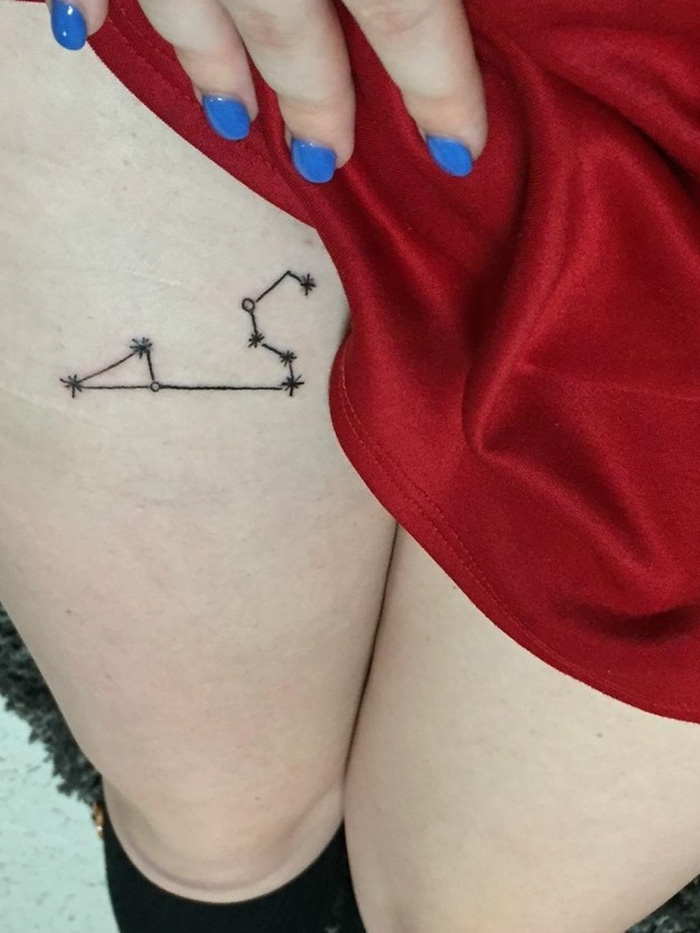 After several years of dealing with depression, anxiety, eating disorders, suicide attempts and self harm, I got my tattoo of the Leo constellation, my zodiac sign, around my self harm scars along my thighs. There’s a quote that says, “stars are the scars of the universe,” so I view my body as the universe and my scars as the stars. The tattoo really helped me to reclaim by body and learn to love it, scars and all. 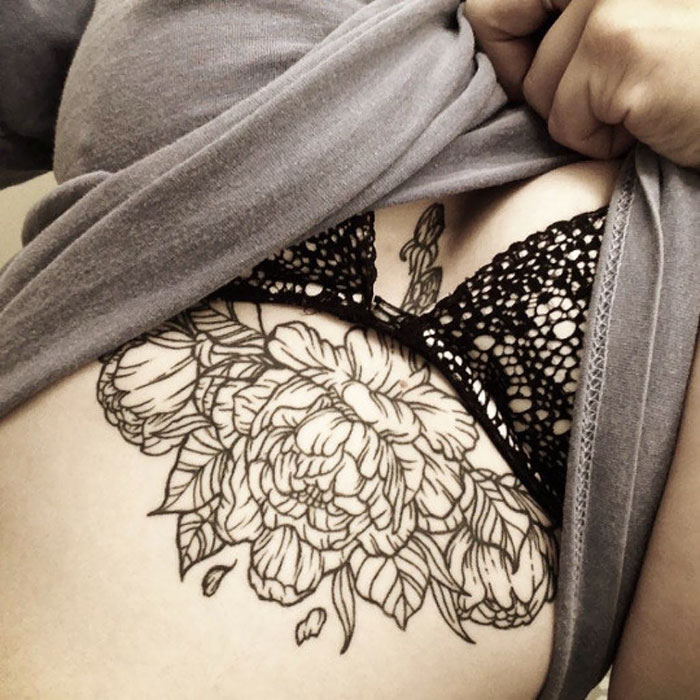 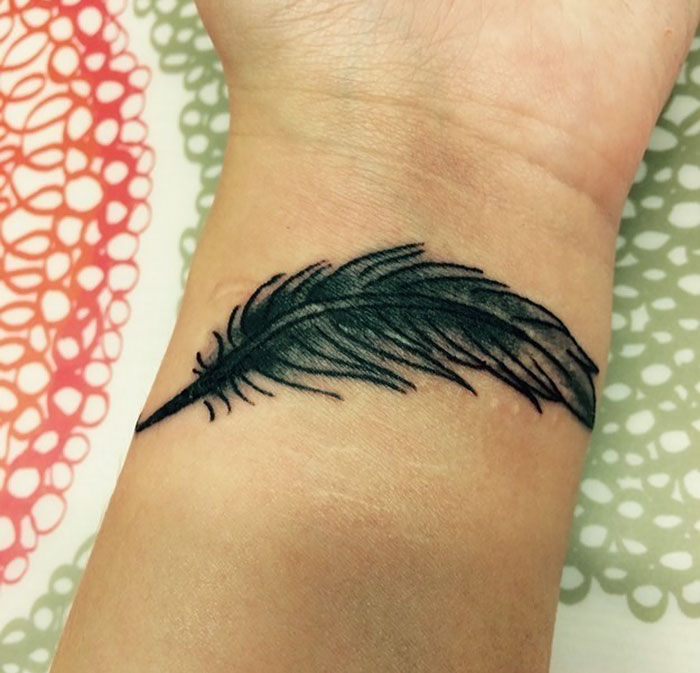 I got this one to cover up scars from self harm. I had a really bad one that stuck out and I felt like everyone could see it and was judging me. I got it on a Wednesday night after another friend died from an intentional overdose. I wanted to remember my friend and it goes with another tattoo of blackbirds I have from the Beatles song “Blackbird”. “Take these broken wings and learn to fly.” Today I am 3 years free of self harm! 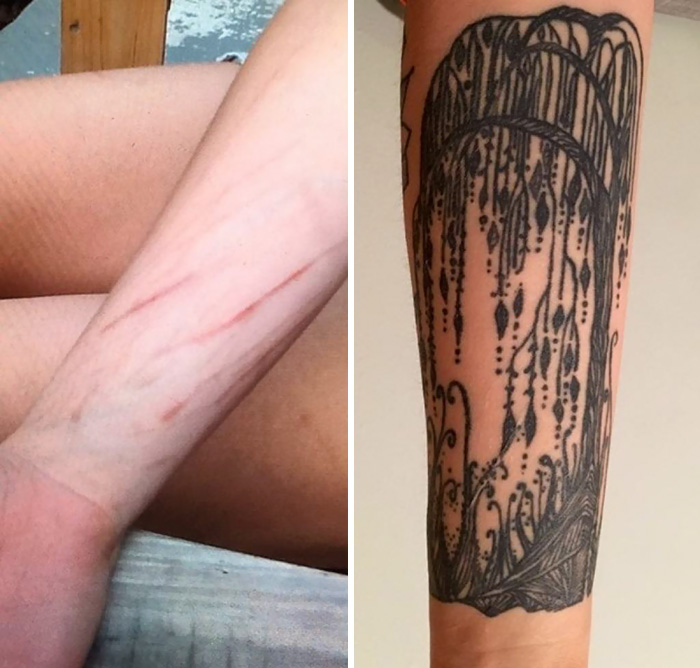 After suffering from severe anxiety and depression which resulted in self-harm, I decided to get a willow tree tattoo over my scars. I chose the willow tree because it is a well-known symbol of adaptability due to its ability to not only survive, but also thrive in some of the most challenging conditions. 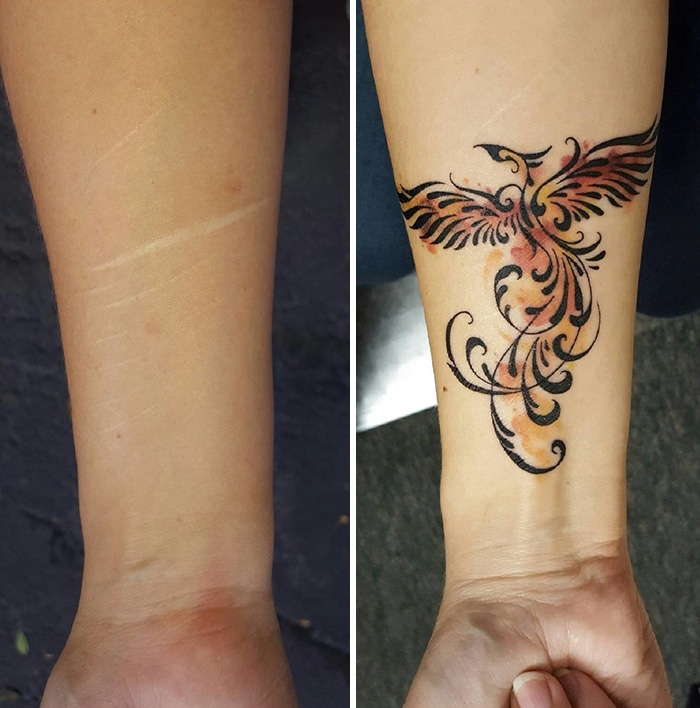 These forearm scars are (pretty obviously) from self-harm and they’re from almost 14 years ago. Been wanting to cover it with a tattoo for half my life, but I guess just recently developed the metaphorical balls to finally do it. So happy! 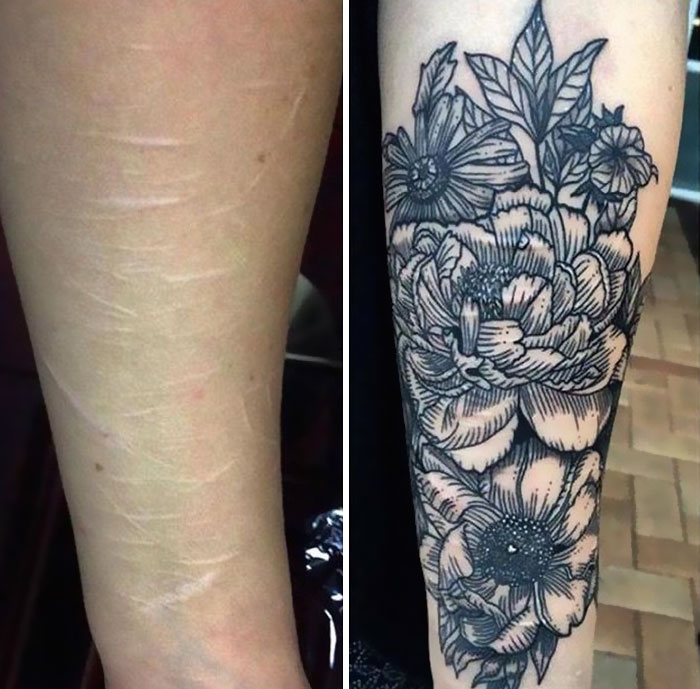 She was so embarrassed, she told me how much pain it brought her when people would question her about them or make comments, which is completely understandable. As I’ve said in the past no one should ever have to feel like a public museum for people to ridicule. The things these people have fought through is admirable and they deserve to know that. People will immediately label self-harm as an act of weakness. I think to crawl out of that abyss and still be here, in this life that honestly is already so brief, and to have changed your life around into a positive is commendable. 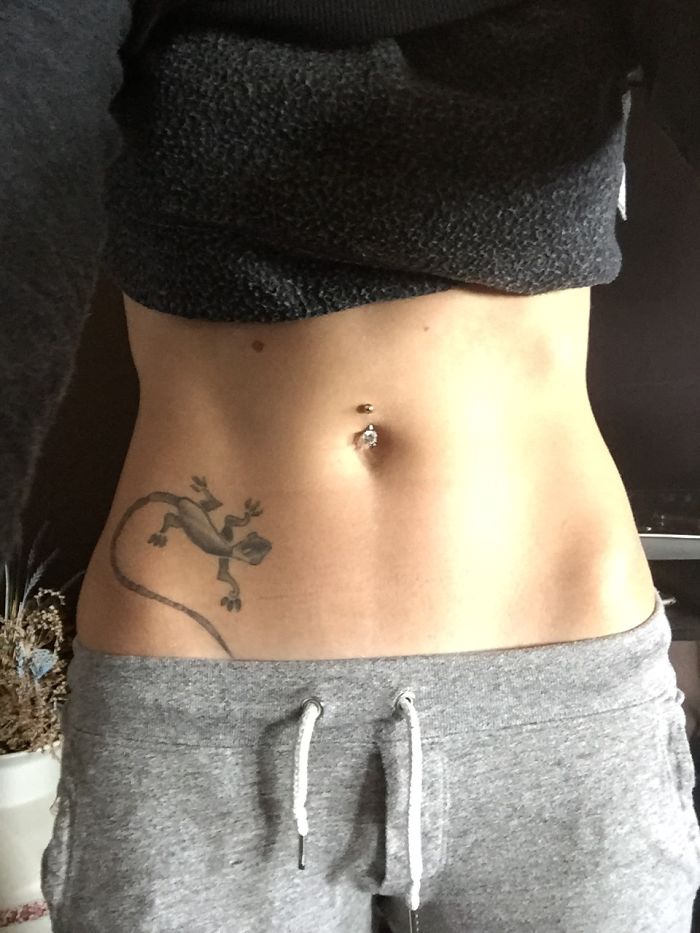 This tattoo covers up a very gruesome scar that I received when my appendix decided to blow up. Turns out it had been leaking toxins into my body for months; which was slowly killing me, and needed to be removed immediately or id be dead by morning. I was stuck in the hospital for a week since they had to basically give all my insides a good cleaning, which meant one ugly scar! I had to wait 3 years after the incident to get this tattoo and I’m so glad I did! Can’t even tell what happened to me. 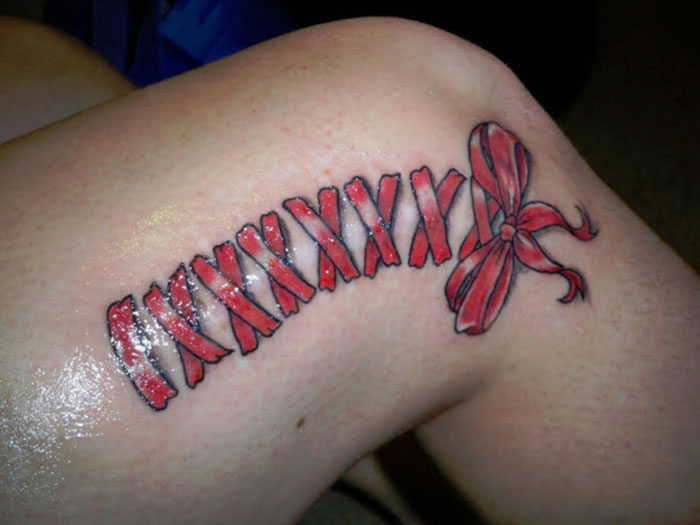 I had a bone tumor in my knee removed when I was 10. This is my ribbon that looks like it’s lacing me up.