A volcano is an opening, or rupture, in a planet’s surface or crust, which allows hot magma, volcanic ash and gases to escape from the magma chamber below the surface.

There is no consensus among volcanologists on how to define an “active” volcano. The lifespan of a volcano can vary from months to several million years, making such a distinction sometimes meaningless when compared to the lifespans of humans or even civilizations.

Scientists usually consider a volcano to be erupting or likely to erupt if it is currently erupting, or showing signs of unrest such as unusual earthquake activity or significant new gas emissions. Most scientists consider a volcano active if it has erupted in the last 10,000 years (Holocene times). There are about 1500 active volcanoes in the world – the majority along the Pacific Ring of Fire – and around 50 of these erupt each year. An estimated 500 million people live near active volcanoes. [Source]

This gallery contains a selection of best photos showing Earth’s volcanoes from above. These stunning images were captured from various satellites and crew members aboard the International Space Station (ISS). Because of unique perspective of one of nature’s most awesome and terrifying events these pictures make a huge impression. 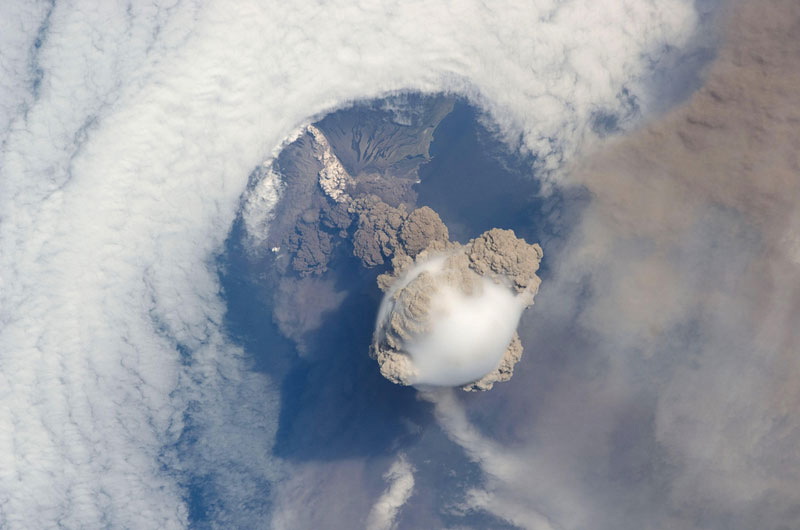 A fortuitous orbit of the International Space Station allowed the astronauts this striking view of Sarychev volcano (Russia’s Kuril Islands, northeast of Japan) in an early stage of eruption on June 12, 2009. Sarychev Peak is one of the most active volcanoes in the Kuril Island chain and is located on the northwestern end of Matua Island. Prior to June 12, the last explosive eruption had occurred in 1989 with eruptions in 1986, 1976, 1954 and 1946 also producing lava flows. Commercial airline flights were diverted from the region to minimize the danger of engine failures from ash intake. This detailed photograph is exciting to volcanologists because it captures several phenomena that occur during the earliest stages of an explosive volcanic eruption. The main column is one of a series of plumes that rose above Matua Island (48.1 degrees north latitude and 153.2 degrees east longitude) on June 12. The plume appears to be a combination of brown ash and white steam. The vigorously rising plume gives the steam a bubble-like appearance; the surrounding atmosphere has been shoved up by the shock wave of the eruption. The smooth white cloud on top may be water condensation that resulted from rapid rising and cooling of the air mass above the ash column, and is probably a transient feature (the eruption plume is starting to punch through). The structure also indicates that little to no shearing winds were present at the time to disrupt the plume. By contrast, a cloud of denser, gray ash — most probably a pyroclastic flow — appears to be hugging the ground, descending from the volcano summit. The rising eruption plume casts a shadow to the northwest of the island (bottom center). Brown ash at a lower altitude of the atmosphere spreads out above the ground at upper right. Low-level stratus clouds approach Matua Island from the east, wrapping around the lower slopes of the volcano. Only about 1.5 kilometers of the coastline of Matua Island (upper center) can be seen beneath the clouds and ash.

STS068-218-007 (30 September-11 October 1994) — (Kliuchevskoi Volcano) The crewmembers used a 70mm camera to photograph this northeasterly looking view of the plume from the Kamchatka peninsula’s newly erupted volcano. The eruption was photographed from 115 nautical miles above Earth. Six NASA astronauts spent a week and a half aboard the Space Shuttle Endeavour in support of the Space Radar Laboratory 2 (SRL-2) mission.

Astronauts aboard the International Space Station (ISS) photographed these striking views of Pavlof Volcano on May 18, 2013. The oblique perspective from the ISS reveals the three dimensional structure of the ash plume, which is often obscured by the top-down view of most remote sensing satellites. Situated in the Aleutian Arc about 625 miles (1,000 kilometers) southwest of Anchorage, Pavlof began erupting on May 13, 2013. The volcano jetted lava into the air and spewed an ash cloud 20,000 feet (6,000 meters) high. When photograph ISS036-E-2105 (top) was taken, the space station was about 475 miles south-southeast of the volcano (49.1° North latitude, 157.4° West longitude). The volcanic plume extended southeastward over the North Pacific Ocean.

Papua New Guinea’s Manam Volcano released a thin, faint plume on June 16, 2010, as clouds clustered at the volcano’s summit. The Advanced Land Imager (ALI) on NASA’s Earth Observing-1 (EO-1) satellite took this picture the same day. Rivulets of brown rock interrupt the carpet of green vegetation on the volcano’s slopes. Opaque white clouds partially obscure the satellite’s view of Manam. The clouds may result from water vapor from the volcano, but may also have formed independent of volcanic activity. The volcanic plume appears as a thin, blue-gray veil extending toward the northwest over the Bismarck Sea. Located 13 kilometers (8 miles) off the coast of mainland Papua New Guinea, Manam forms an island 10 kilometers (6 miles) wide. It is a stratovolcano. The volcano has two summit craters, and although both are active, most historical eruptions have arisen from the southern crater.

After awakening on June 4, 2011, the eruption at the Puyehue-Cordón Caulle Volcanic Complex continued through at least June 6th. Located in Chile, just west of the border with Argentina, Puyehue-Cordón Caulle emitted a plume of light-colored ash that stretched along the edge of the Andes. Hours earlier the prevailing winds had shifted, forming the prominent kink visible in the plume. This natural-color satellite image was acquired by the Moderate Resolution Imaging Spectroradiometer (MODIS) aboard Terra on the morning of June 6, 2011. At the time the Buenos Aires Volcanic Ash Advisory Center (VAAC) reported that the ash plume reached an altitude of 40,000 feet (12,000 meters).

Two East African volcanoes, Nyamuragira and Nyiragongo, account for 40 percent of all recorded eruptions in Africa. The two volcanoes sit along the edge of the Western Rift, part of a giant crack in the Earth’s crust that runs for thousands of miles from the Middle East southward to central Africa. In addition to their shared tendency to produce unusually fast-moving lava flows, the two volcanoes have an even rarer trait in common. The crater of each has periodically contained a lava lake, a huge volume of molten lava pooling in a high-walled summit crater. The lava lakes can drain during eruptions, either spilling over the rim of the crater or bursting from a fissure or vent on the flank. This high-resolution images from the commercial Ikonos satellite shows the craters Nyiragongo. According to the Smithsonian Global Volcanism Program, the most recent lava lake in the Nyamuragira crater drained during an eruption in 1938; the remnants of that activity are the lighter-purple lavas, mostly in the southwestern part of the crater. The lava lake in Nyiragongo has drained and refilled several times during eruptions in the past few decades. Evidence of its simmering presence is provided by the plume of smoke and/or steam that billows from crater. In 2002, Nyiragongo’s lava lake drained during a flank eruption on the southern slopes. That lava flow raced into the city of Goma, killing several dozen people.

Ash has been the primary hazard from Shinmoe-dake Volcano since it began erupting on January 26, 2011. This natural-color satellite image shows an ash plume stretching eastwards from the volcano, and looping around the city of Miyazaki. The ash has caused flight cancellations, halted trains, and closed schools in the region. The image was acquired by the Moderate Resolution Imaging Spectroradiometer aboard the Terra satellite on February 4, 2011.

At 2,911 meters, the summit of Merapi Volcano and its vigorous steam plume rises above a bank of stratus clouds on its southern flank on August 24, 2003. One of Indonesia’s most active volcanoes, it has been almost continuously active for nearly ten years, including periodic pyroclastic flows (hot ash and rock debris) and avalanches. The volcano is located less than 25 miles north of the city of Yogykarta in central Java. More than 50,000 people live adjacent the treacherous southwestern slope, where volcanic material often sloughs from the unstable summit. Note the deep ravines on the eastern slopes providing rich soils and moisture to the agriculture below.

When this southward-looking photograph was taken by the Expedition 2 crew aboard the International Space Station, the city of Catania (in shadow, ~25 km SSE of the volcano) was covered by a layer of ash and Fontanarossa International Airport was closed. On that day an ash cloud was reported to have reached a maximum height of ~5.2 km. Plumes from two sources are visible here–a dense, darker mass from one of the three summit craters and a lighter, lower one. The record of historical volcanism of Mt. Etna is one of the longest in the world, dating back to 1500 BC. Two styles of activity are typical: explosive eruptions, sometimes with minor lava flows, from the summit craters and flank eruptions from fissures.

STS068-214-035 (30 September 1994) — One of the first photos taken by the crewmembers on launch day of the Space Shuttle Endeavour was this 70mm frame of the Kliuchevskoi volcano on the Kamchatka Peninsula in Russia. The volcano was near its peak at this time. The large, black eruption plume billows from the summit, as ash is being deposited on the snow-covered region to the east and southeast (north is to upper left). A small steam plume rises from the peak of Bezymianny just south of Kliuchevskoi (or just right of center). As various members of the six-person crew were using handheld cameras to record the eruption, hardware in Endeavour’s cargo bay was taking radar data of the event in support of the Space Radar Laboratory (SRL-2) project.

Astronauts aboard the International Space Station (ISS) photographed these striking views of Pavlof Volcano on May 18, 2013. The oblique perspective from the ISS reveals the three dimensional structure of the ash plume, which is often obscured by the top-down view of most remote sensing satellites. Situated in the Aleutian Arc about 625 miles (1,000 kilometers) southwest of Anchorage, Pavlof began erupting on May 13, 2013. The volcano jetted lava into the air and spewed an ash cloud 20,000 feet (6,000 meters) high. When photograph ISS036-E-2105 (top) was taken, the space station was about 475 miles south-southeast of the volcano (49.1° North latitude, 157.4° West longitude). The volcanic plume extended southeastward over the North Pacific Ocean.
Like it? Share it!