Prison tattoos and their meaning (15 pictures) 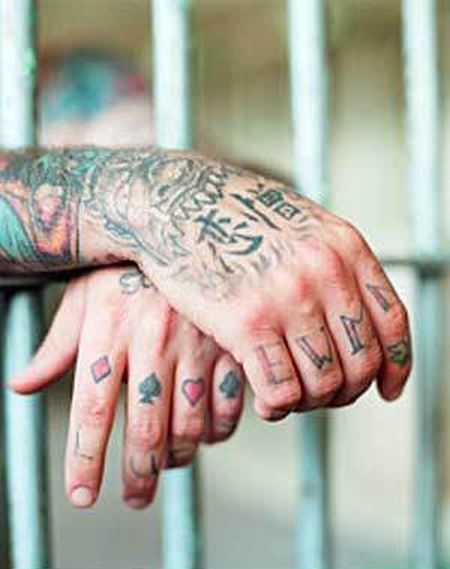 Prison tattooing is the practice of creating and displaying tattoos in a prison environment. Present-day American and Russian prisoners may convey gang membership, code, or hidden meanings for origin or criminal deeds. Lack of proper equipment and sterile environments lead to health risks such as infection or disease (hepatitis, AIDS) from contaminated needles.

There are many different symbols and numbers that represent multiple gangs or groups. Certain images like spider webs can represent the length of sentences. The well-known teardrop tattoo may mean one for each murder performed. Tattoos are also used to communicate who the inmates are as people – for example, white supremacists will display prominent tattoos to show their beliefs. Some common symbols used in this manner are the percentile 100%, a white supremacist indicator of racial purity; Valknuts; swastikas. Three dots arranged as a triangle, mean “mi vida loca” or “my crazy life” to Mexican inmates linked to the Mexican Mafia, while four dots have the same meaning but are found on Mexican gang members associated with the Nuestra Familia; a clock with no hands represents “doing time”; spider webs are a symbol of being trapped; or the number 13 to signify being unlucky.

One common prison tattoo is the five dots tattoo, a quincunx usually placed on the hand, with different meanings in different cultures. [source]