Amazing Board Games To Get Along With Today

This year has been weird, and this statement would be quite an understatement witnessing all the shocks this year keeps shedding on us like it’s mere confetti. And let’s not forget that with the principle of social distancing how little sources of entertainment we are left with. We can’t gather around in big circles either go to the movies or bask on beaches. Hence, in the end, it’s all wrapped up to you and your family. And there’s no denying the fact that families have always bonded over a shared joy of playing board games.

So, let’s not divert and list the best board games you can set your minds to pass the time and turn in the dreary days into those filled with exciting victories and fascinating moments.

The Pandemic Board Game

As much of a coincidence you consider it to be, it’s not. This game was developed years before, but now that people could relate to this more, this board game surged to great extents of popularity. As per Betway Google Trends data,‘Pandemic board game’ received 246,000 searches worldwide in March. This game requires the players to win over the pandemic situation and prevent it from spreading, which leads to an immense rush in the players, making it one of the most exciting board games to try onto. 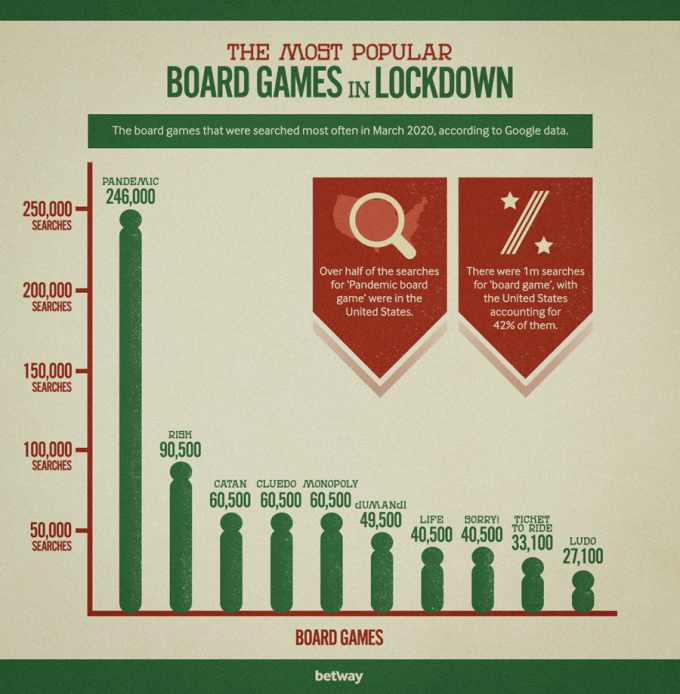 Scrabble is a multiplayer board game encircling around fun learning activities. The game was initially launched for people to learn in a fun way; this ensured their vocabulary would strengthen alongside their entertainment. It seems like those days of fun learning are back, as researchers claim that Scrabble is the most searched game on the Internet. This word board game that is claimed to be an updated version of crossword has broken all records and paved its way to the most searched board game crown. Hence, it would not be wrong to suggest you lay your hands on this glorified board game.

Monopoly finds its roots back in 1903 America, with the hope of explaining the single tax theory that prevailed at those times. Soon it was transformed into the sheer purpose of pleasure and entertainment, and the rest is history. The monopoly that deems to be the favorite board game across entire Europe and Asia, pertaining to this popularity, the game was molded into several other versions pop culture versions, football club versions, and several others and underwent to captivate the audience of around 103 countries in about 37 different languages. Therefore, this game has refused to fall into the aging shackles and label itself to be outdated; rather, it sticks around and transforms in accordance with the changing trends and culture.

This game is the ultimate favorite; it feels like Indians are innate to be drawn to this board game. Ludo has traces of origin in India, where it originated from an Indian game Pachisi, highlighting the fact that it was most searched in India and the third most searched board game in the entire world.