Thousands of Romanians took to the streets in across 50 cities in Romania and abroad, including Washington D.C., Berlin and Amsterdam to vehemently oppose the passing of the draft legislation on the open-pit cyanide-based mining project at Rosia Montana. According to Gabriel Resources Ltd., the Canadian company behind the scheme, the plan for the project is to dig up the estimated 314 tons of gold squirreled away in Rosia Montana using an astonishing amount of 40 tons of cyanide per day. Chanting slogans such as “Together We Save Rosia Montana,” the Romanian protesters expressed their resistance to the mining project and demanded the government’s resignation, while sending a similar warning signal to the opposition. In Romania, protesters have announced their intention to keep demonstrating, until the government’s measures are revoked. 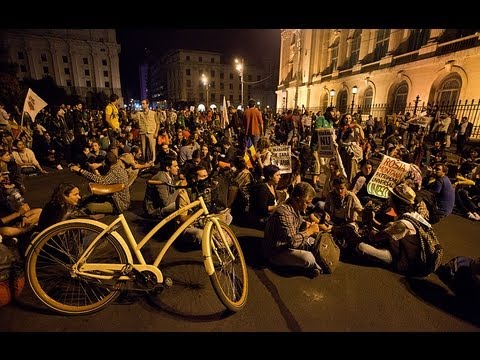 This is how Rosia Montana looks like. Image source: i-tour.ro

Thanks to Bogdan Becheru